[The LA Diaries are excerpts from the working journal I kept while living and working in Los Angeles a few years ago. The entries are raw, often unintelligible, with literally no regard for convention (neither literary or social) or mass appeal. I have decided to publish parts of this journal without regard for grammar or presentation for regular readers of this blog seeking a window into the destinationless spiritual wanderings of a practicing karcist.] 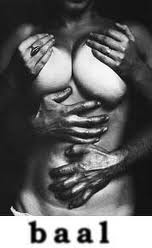 [Written after undertaking the consecration of a solid gold demonic seal of Baal. A demon-king of some renown featured in both the Old Testament and most of the old Grimoires with which I had little experience previous to the contracted work. While I realize some aspects of this text may seem disturbing it is a true relation of my experience of the spirit.]

Baal is the unformed stuff of magic. The black empty spirit of the witches’ Sabbath. Strong stuff, goes straight to the head. The arbitrary meting out of karma is what keeps it fair. Sometimes it’s the Internet going out, sometimes it’s falling off a roof. If it was all so transparent that you could anticipate its execution it would sort of invalidate the whole thing, wouldn’t it. To Baal we are just a bunch of hungry ghosts that got a body. For the most part I am inclined to agree …but what a body.

Baal is the naked mechanic of the magical exchange. A process which seems darkly joyous in its ambivalence toward human suffering. We embrace it as sorcerers or we are haunted by it, as we are haunted by so many of our revelations. He is there in that process too. Here among the fires of creation he is everywhere. Ellison’s Paingod. Stirring the pot of karma, Baal is some long dead God-king whose ghost outlasted his gods. They took a great deal of care preserving the old god-kings in death back in the day, they were total pros. Shax got his talon's on the gall bladders of some of those old Egyptian geezers back when they raided their tombs like they were 7-Elevens but I digress.

In his purest form he illustrates the manner in which you unknowingly generate conflict with your actions. The subtle undertone of ‘you’ beneath everything that you do, the very basic expression of your being. He is that pure hunger in the roots of desire. Baal is not headless, he is just deaf, blind and dumb. There is a difference.  You got to seal a body up to preserve it in death, you got to cover those holes, man. All the death will run out everywhere. He is still out there beneath the earth somewhere waiting for the world to end. The god-mans hunger turned all up on itself and gone M. C. Escher on your ass.

On some level the sorcerer must concede that if he can manipulate the process, then the process is not sacred. Or conversely, that the actions of the sorcerer profane the process. Baal reveals sudden death by bus is an available karmic outcome to nearly every problem because you deserve it. Your human birth anchored you to death through the vehicle of karma. Baal reveals that all the sorcerer does is stir the pot.  That none of it actually matters to God, that suffering is a human concept which has never occurred in the mind of the Great Almighty. You can live your dreams or die a crack addled failure, Baal doesn’t care. He knows you started an ignorant moron, you can hardly be blamed for ending up one. The path was so clear.

When one man is raised above others, Baal is there. When a 3 year old chokes to death on it's blanket, Baal is there. In both cases, he couldn’t give a rat’s ass. Baal is always fair, it’s you that is being unreasonable, reading meaning into shit where there is none. Baal is there from the beginning to the end, for the lot of us.  He is the secret truth of our human body and its animation, the inexpressible dark hunger. It’s killing us. We hunger for suffering.

That’s Baal, our collective hunger for suffering and death. Karma is a bitch. They say we fed him babies once. It’s possible I guess, at the most basic level that’s what we do, feed babies to karma.

That’s what Baal’s arrival meant for me. It’s all fucking arbitrary. If anyone is crazy enough to hire a witch-doctor then the path is laid, paved and lit with the corpses of dead Christians like the streets of old Roma.  Morality has no place in the mojo. Morality is meaningless, it’s the sorcerers sacrificial lamb. If Christ died on the cross for me then I killed him, I murdered God. It wasn’t hard, he was asking for it. Like the rest of us, his human birth made it karma. Nothing unfair about it, when he raised his eyes to heaven and asked why he had been forsaken he got the same answer we all do ..none. If that’s true for Old Glory himself then it is most assuredly the end to which you are destined. Baal don’t care, so why should I?

I won’t be haunted by it. Baal’s old ghost is just too ugly and self-important. There is no such thing as ‘bad karma’. There is only karma. I say, fuck that bitch. Baal can suffer with the rest of us, it’s what he gets for keeping his spleen in a jar. Baal may have been the dark sun once but now he is a pair of old shoes. Angry, malevolent old shoes. I’ll keep them handy for when I have to paint or traipse through the mud or some shit and old Baal will be grateful for it. The sister fucking, murderous tyrant loves the dirt, lives for it. Even now, all but forgotten Baal plays in the shit and loves it. It’s why the Egyptians saw him as a demon-pig. Dirty corpse-eating fucker can’t get enough of our morals.

Posted by Kdjshhskms at 2:42 PM