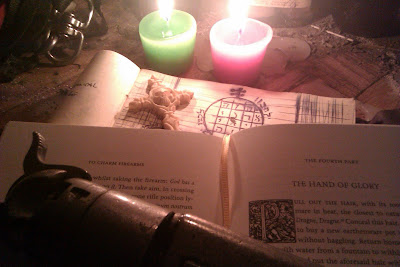 The book is anointed with rum, blood and the ashes of my cigar, mixed together and smudged onto the cover page next to my signature.  Passed repeatedly over the smoking resins, a prayer is said for the honored souls of the authors blood.  Each candle is lit with a whispered name and a weapon is laid out around the book.  The fire in them fills the room.  The Holy Ghost languishing almost sensual in the incense smoke.  The Virgin wet with the spirit as the Word made flesh gets nailed on the cross.  Glory, glory, glory. Deo Duce Comite Ferro.
We got Michael Cecchetelli’s ‘Crossed Keys’ recently and can confidently claim to have read the book cover to cover several times now.  Like the Verum (see, Spring Devils and the Giving Hands) the Black Dragon is what a renaissance handbook of black magic is supposed to be.  Big devils, magic guns and naked dancing girls.  Traditionally, the Black Dragon has been presented as a sort of demons of the qlippot handbook or an example of what happens when a Golden Dawn initiate goes totally rogue.
Crossed Keys however is obviously a used book.  Supremely functional and perhaps the best working example of a text assembled by the clerical necromancers that I have read.  Penitential Psalms, man.  It was like I got to peek into the history of hoodoo.  Crossed Keys is my first introduction to the Enchiridion but the association of Penitential Sacrifice to magical effect is a long one, especially among the hoodoo.  (Really everywhere, the Buddhist Confessions are another excellent example of penitence equated to magic.)  A lot of Prayer Books circulated in Europe and a number of them took on occult proportions.  The juxtaposition of the Seven Penitential Psalms of the Enchiridion to the Black Dragon’s ‘Devil of the Day’ approach is a bit of effortless genius (it literally instructs you to do so in the Black Dragon).  In short, Cecchetelli is hoodoo boss.
Without a doubt, the hoodoo love magical prayers.  Throw in the Novena’s and the Latin Pater Noster, Ave Maria and the Veni Creator and a way to enchant your heater and you have got yourself an instant classic.
Squished between the two texts and in a portion of the text altogether too brief, Cecchetelli illuminates the great primary pitfall of the text as it was communicated to him in his encounter with Frimost, namely that the language of the conjurations of the spirits of the Black Dragon should be amended to better reflect his actual relationship to the religious eschatology of the text (we will assume that Michael Cecchetelli is not ordained by the Vatican) and a second admonition by Surgat regarding the significance of the order in which the spirits are presented in the book.  This portion is taken directly from his working journal so I shall interpret the absence of the amended conjurations as a sign that Michael is some sort of secret magical arms dealer and is getting some mileage out of those.  Admirably, if the instructions are followed in the text then everyone should have a collection of uniquely amended conjurations to work from which is really as it should be.
But then, you all were sold at ‘big devils, magic guns and naked dancing girls’ which really just proves that the lot of us are better served by a little penitence than yet another qaballic hierarchy.  If that doesn’t seem devilish enough for you then you my friend need a good spanking.
Posted by Unknown at 12:34 AM