Tomorrow, many things will change. Mars will turn its back to the sun and cast a shadow path through the sign of leo. I can't wait to see what that looks like. My home cycle is mars in cancer and I am fucking free of that shit yo!  Mars in leo is however the home cycle of a compatriot of mine and it will be interesting to see how that alters the dynamic of a mars retrograde.

Mars gets one degree of leo to rally his resources before he begins his first assault. Not much time really, one of those crucial elections that sometimes slip us by in a moment. One degree, give or take. I have a mars rulership and when I consider the nature of the work I do for the Firm the term 'mercenarial' comes to mind. So the movements of this planet are pretty important to the ebb and flow of noteworthy developments in my life. For those who are not so directly engaged by it, for whom its actions are perceived as coming from without it will be as though you are waking from a dream. Crazy mars kept safely locked away in cancer has broken out. Augustine B. describes this period with the mystery play of the Strength Atu among the Tarots Major Arcana and it is most fitting. The woman of this card representing then you sleepy villagers in the peaceful hamlet of Leo and Mars the beast who even now has broken free of his prison with a violence grown ravenous and bestial. Oh, what a terror we will be.

I have never contained the energy of mars in leo in a talisman or seal but I did catch mars and venus with their pants down in aries last spring. Number two of the big four. 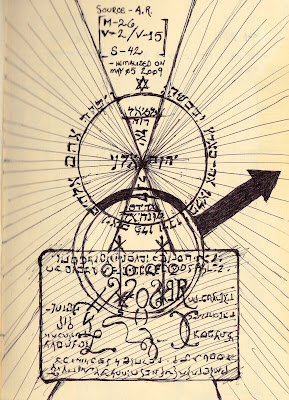 Both this Seal and that of the Strange Device will see some heavy usage over the upcoming mars retrograde.  Most likely by the end of the day tomorrow or very shortly after we will have seen the shape of that shadow and the spirits of these two Seals especially will come to life.

Tonight my brother will tattoo the Strange Device into my skin, in my home (from which I have driven all the ladies) during this one degree of leo while I charge a Smith & Wesson .45 from 1887 for use as a talismanic physical base. A long and gracefully phallic weapon that spits iron and fire. It will take more than this session to complete the alchemical fire-arm, each component has a spirit and a balance within the device. Tonight however, I shall give it its purpose and its name.

After I get a really bad ass tattoo.