A strange fire burns in the corner, giving off its strange heat.  For weeks now there is always an active sigillum at work.   Months ago I captured a strong and persuasive mercury in a magical seal and that single act has taken it to a whole new level.  I have created five seals in the same manner as that first mercury seal and each makes a significant contribution to ramping up the general energy level of a given moment.  A necessary undertaking in the mercenarial world. 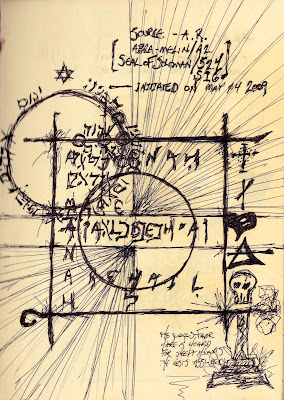 Hence the strange fires and their strange heat.

For most of this recent period my work has been carried out in concert with a duchess of the goetias.  I mentioned in an earlier entry my initial contact with this daemon, the 56th of Solomon's 72.  When mercury cast its shadow against its retrograde that shadow was Gamori.  The shadow of things to come.  Over the subsequent weeks my partner and I could only describe our experience of this daemon in terms synonomous with the originative concept of the succubus/incubus dynamic.  Subtly attached to human sexuality for time immemorial.  In the old definitions gramarye and glamoury are synonmous terms, the art of occulting meaning in beautiful nothings.  Its a good name for a vampire.

When mercury hit virgo we took Gamori out of the fires to cool.  She was making it hot.

Soon enough saturn will activate libra's malefic charge and Gamori won't need that strange fire because s/he'll be a strange fire all hir own.  For now mercury will again turn its attention to crossing the axis of the saturn-uranus opposition.  We have given the fire over to Ezili and the movements of venus through leo.  Gamori identifies the wound and Izili anchors her seduction to it.  Sometimes actual love can be found in juju like that although usually its some form of clinical co-dependence.  V. naturally gravitated towards Freda as a counter-part to Gamori's vibe and I can feel the changes in the air now.  Soothing the frayed and tattered remains of our ethics after accompanying Gamori on a week long bender of sexual depravity.

Sometimes I feel as though I have a weird job.