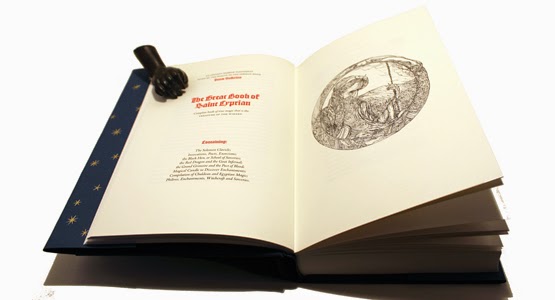 There will come a time in the future where the release of the Testament of Cyprian the Mage will be seen as a seminal point for western occult philosophy.  The final installment in Jake Stratton-Kent’s Encyclopedia Goetica, wherein a meaningful alternative to the masonic crosses the current rash of western occultists have crucified themselves on is revealed.  I say, ‘in the future’ because masonic initiation is as addictive as heroine and I say, ‘rash’ because it suggests a bunch of similarly aligned or focused practitioners as well as a distracting and ugly eruption upon the flesh of a thing.

With the Testament as his cypher Jake delves as far as our contemporary grasp of far history will allow, to trace the roots of the grimoire tradition, a tradition which is slowly taking a position of primacy in western occulture.  With Cyprian as his tour guide Jake visits each of the great centers of knowledge in the ancient world and like his guide discovers facets of the Arte which have been mastered there.  It is a powerful and thought-provoking journey which comes to highlight stellar lore and ancient healing paradigms as the root of what is now known as goetic magic.

It persuasively sheds the contemporary dualism's of grimoire work (good/bad, holy/evil) in favor of an ambiguous eschatology rooted in ancient correspondences between our planet and the life it sustains and the greater universe.  No small feat and one which calls into question a great deal of our current methodology and mythology regarding the daemon of the grimoires.

Though it is the conclusion of the Goetica series, it is more properly a point of departure.  It is the moment where your hand is let go.  Every historical revelation raises a myriad questions best negotiated by the individuals sympathy to the work.  I think that most veteran practitioners with a grounding in Goetia, Hellenistic Greek thought or plant-lore will have at least one ah ha moment and that those newer to the exploration have a profound leaping off point.  It will certainly have me returning to some of my earlier explorations with the daemon of the old books, in particular the old Goddess figures which didn’t fare so well in their Pauline interpretations.  So much good stuff.

In a way that seems strangely fitting, this is my first purchase of a digital copy from the Scarlets. Though I intend to add a physical copy of the book to my collection I have been in a state of perpetual transit since last winter and it simply doesn't seem as though that is going to change in the near future.  So many strange syncronicities had arose that finally I simply broke down and got the ePub version.  Somehow even that liminal state of transit-induced limbo was fitting to the work.  It is a book whose value is found in between things, between nations, between the lines, between religious certainties, an exaltation of the liminal state.  I cannot simply consecrate it as a book in my usual manner because it is not a book in both the literal, physical sense as well as the more esoteric, it is a mythic cypher.

Fittingly, though I shall read and reread it, I shall never dirty it's pages.  Though I will carry it with me in all my travels, I shall never mar its cover.  It feels correct to me, untethered from the physical privilege of hard copy Cyprian is free to run viral through all my triumphs and evil deeds.