My brother, who has tattooed a very great deal of magic into my skin already has gotten it into his crazy brain to make a shoulder sleeve out of the image below. 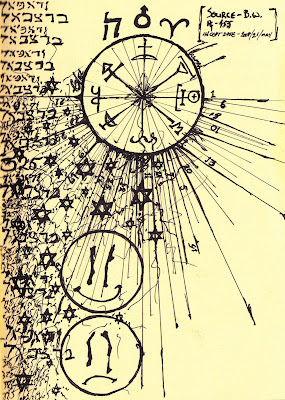 This is 4 out of 5.  The Seal of Strange Device.  The devil which took hold of my hand to draw it informed me that its contemplation would reveal the secret mechanic which underlay all mechanic exchanges.  At the time my car needed to have its brakes rebuilt and its alternator and radiator replaced.  I figured a 'secret mechanic' could be useful.

This was the last of the big four that came out of the volatile astrologies of this last spring time.  This particular seal had as its focus the energies of mars and it is a seal of this planet at the epicenter of the design.  Much of the numeric and qaballic formula for this planet was also incorporated.  At some point I observed myself quite dispassionately turning the book this way and that and scribbling the number signatures onto the page and it occured to me that this was perhaps preoccupied with some grander mechanic than the one which serviced my brakes.

Nonetheless, the car was rebuilt.  After which more subtle attunements became apparent.  Two weeks later when V. and I were winding our way through the fog held Adirondack Mountains it occured to us that we had remade more than our car.

Really, the journey that began last spring is still in its early stages.  V. and I are in Toronto again but that will change again soon enough I think.  This summer has taken place in many places.  Its hard to say with certainty which of the big four has served us the best.  I made them all within a period of a few weeks (under potent elections) and afterwards life changed dramatically.  I have a distinctive mars rulership though and Trevor has shown his usual uncanny instinct in choosing this particular piece.

Interestingly, this manner of astrological fetishism (the juxtapositional composition of occult iconography)was also revealed to me just previously, immediately after Trevor had tattooed the veve's of the seven lwa families down the inside of my left arm.  An event which took place in late march on my birthday.  So there is a sort of nice complete cycle there.  Also, here at the end of the mars-cancer cycle (which I have hated very much) it feels sort of like a confirmation from the universe that I figured it out. Came out stronger as opposed to wounded and petty.

Now to choose an election on which getting the seal fo strange device tattooed into your skin will transform you into the uber-mensch.

Posted by Kdjshhskms at 9:25 AM